CADFA at the Café Palestina

Nandita Dowson helped found the Camden Abu Dis Friendship Association, CADFA in 2004. It is a registered Charity that promotes Palestinian human Rights. At the end of 2017 she opened the Café Palestina. Apart from functioning as a café, it has handmade crafts and olive oil from Palestine on offer for sale. They host conferences, cultural events and Arabic courses for children and adults. Café Palestina also helps to raise money for Cadfa.

What was your reason for starting Cadfa?

To raise awareness of the human rights situation in Palestine and involve new people in campaigning for human rights. At that stage even more than now, it seemed that while some political people could deal with Palestine as an issue, others were just frightened by it so didn't deal with it at all. So, we decided to build a consistent relation with one place (which we called 'grassroots twinning') to help people in Camden (our borough) connect with people in that place so they could see how people like them lived there. Our idea was to link teachers with teachers, children with children, health workers with health workers etc, and to support connections between organisations like schools, community centres etc. Then the idea is to work with people to make sense of what they find - to look at what is going on in Palestine and to take the human rights issues to policy makers to call for change.

How many individuals have participated in your exchanges?

Over a thousand by now!

Tell us about what are the results of these exchanges?

The results are strong, which is why we keep going although this is actually hard work for a small organisation.

From the individuals involved, we often hear the words 'life-changing.' British people learn so much about Palestine, about the human rights issues and gain the motivation to be active. Palestinian people (we often try and take people who haven't had the chance to go abroad) see new things, learn lots, get a feeling of support from people they often didn't expect to support them and are pleased to contribute and to be listened to by hundreds of people in school assemblies, public meetings etc. So, for both they contribute to open-mindedness and hope.

For people around them in both countries, the exchanges raise awareness. In Britain, we organise opportunities for visitors to meet people across the country in small ways and big ones, and so thousands of people can meet or listen to visitors, in schools, colleges, community meetings of various sorts, public events (each visit is organised separately). This contributes to a general raising of awareness of what Palestinians are facing.

For us as an organisation promoting human rights, it helps us raise the issues both locally (and in other parts of the country) at a grassroots level and to policy makers at a national level. It makes the issues of Palestinian human rights personal and meaningful: people can remember the young boy they listened to whose twin is in prison or someone they met who had been injured, etc -  personal stories are important in building understanding.  We often invite MPs, MEPs to meet young people who come, or take groups to meet them.

Cadfa is lobbying for Palestinians and Israeli to be treated equally when applying for a visa to the UK.  Is the UK government gradually beginning to change its position or do you believe it’s been intransigent?

Yes, that's right, and also we have a petition on the same subject Sign the Petition

We haven't really got any indication that the government is taking the visa question seriously but we are keeping going. The government haven't changed their position on Israel/Palestine- they wanted to celebrate the Balfour Declaration last year!   On the other hand, Palestinian issues are reaching MPs and the government from their constituents all over the country regularly now -  I was told that this is the biggest post bag to the Foreign Office these days.  Some of these letters are from people who have been on our visits to Palestine or have met our Palestinian visitors etc - and it is important that they keep up the pressure.

When did you become interested in the "Palestinian/Israeli" conflict?

Through meeting Palestinians and learning what was going on - this was a shock to me; I had managed to think I was quite aware of the world and yet at that stage I really didn't know what was happening (and had happened) in Palestine; indeed, my school, the papers, the news were telling the wrong story even more than at present.

What shaped your opinions?

Well it has been a long, long time!  A lot of years and a lot of learning from meeting people, reading and talking and also going to Palestine... constantly shocked and learning more.  Seeing films. Seeing the news - the things that got through the blackout... Working things out slowly!

Also, opposition to racism in any context, outrage that people here are systematically misinformed about Palestine/Israel, a background in education so a belief that people can change the way they see things

What was your inspiration for setting up Café Palestina?

Well, earlier there was CADFA, which tried to reach new people to talk in a normal way about Palestine. We did a lot of stalls at community fairs etc and found it helped to bring people to our stalls if we sold pretty, Palestinian pottery and embroidery - something to look at while we talked - and we also thought it useful to promote Palestinian products. We spent a lot of years wanting something like CADFA Palestina - a place on the High Street that said 'Palestine' to the public (like you can mention the name of any other country without shock) - and a place that would sell Palestinian goods and food, but be a normal place, easy and unthreatening to go into, that would allow lots of different people to meet and talk about Palestine in a normal context.

Could you tell me about a project Cadfa is currently fundraising for?

We are trying to raise money for an all-girl football team from Abu Dis to visit the UK. We had an appeal for money that didn't raise enough, so we wrote a project application for an Erasmus+ grant (this is the EU fund that has sponsored quite a number of our visits) for a sports-focused visit for young girls from several European countries and Palestine, including the Palestinian girls' football team. So far, twice this year, Erasmus+ have put this project on a 'reserve list' - they have said it is a good project but they haven't actually funded it yet. In theory we are waiting till the end of July to see if we can get funding but I believe we will have to reapply. It will be wonderful when we do it.

Preparing for the CADFA conference 2018 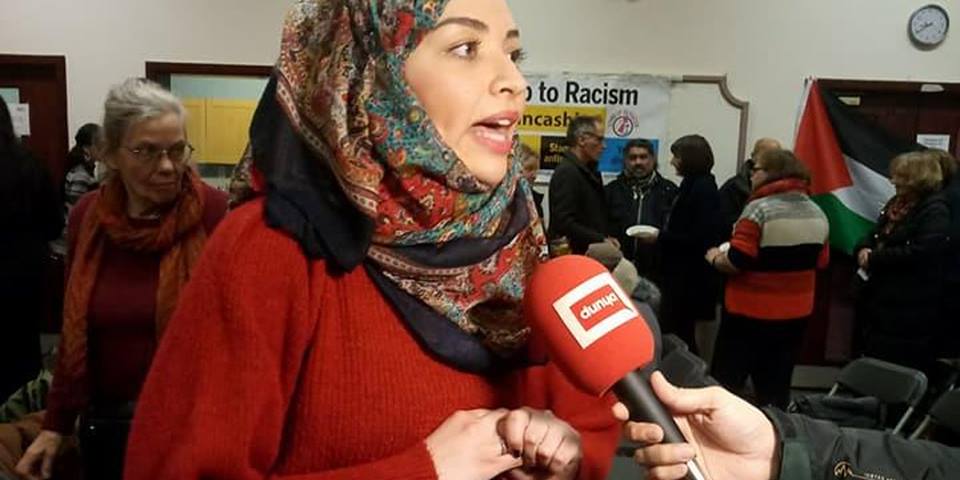 We’re looking forward to CADFA’s conference 2018 which will take place on 14th July.  The conference will bring members together for an update on the serious situation in Palestine in summer 2018 as well as a discussion on the next steps for CADFA as an organisation promoting human rights in Palestine.

We are looking forward to hearing from speakers from Abu Dis, Jerusalem and from the Bedouin village of Jabal al- Baba as well as having workshops led by people who have been involved in CADFA’s activities in the past year. Martin Daltry from the British Council will open proceedings.

The conference is open (free) to members and we also welcome new members – you can join CADFA HERE and register for the conference HERE.

The morning sessions are open to others subject to space: suggested contribution for non-members £5.

CADFA members will be invited to lunch. Remember that registration is essential if we are to have lunch for you! At this stage we are hoping to have the conference in CADFA’s new home, Café Palestina, but will consider moving to a bigger venue if more than 50 people register.