Finding the truth in Palestine

In 1971, as a newlywed, I was convinced to join my local chapter of Hadassah magazine.  I  joined not because I was a Zionist, but as a way of meeting more women in my town.  I did believe the lies about the founding of Israel, but had no clue as to the reality.

My former in-laws gave me a lifetime subscription to the magazine, and long after I was no longer involved with the organization I would read some of it when it arrived monthly.

The day after I read the review of the book "Walled" I called a friend who had sometimes made anti-Zionist remarks but always, when I asked her to explain, she wouldn't.   But when I called her that time I said that I had read the review and apparently I didn't know the whole story but that obviously she did.  I told her I had to hear it.

The next night was a report back from a small interfaith delegation that had just returned from the West Bank, including a Rabbi.  My friend and I went.  There had been a snowstorm and we were the only ones in attendance.  So, instead of the panel doing a presentation, we all sat around a table and talked.  I have to admit that it wasn't until the rabbi told me the truth about Israel's founding and the ongoing ethnic cleaning that I could really believe it.  I remember to this day, he said you can go to Israel and its beautiful, sunny, and nice beaches, and it could be Aruba.  But the minute you cross into the West Bank, you see the reality and it is horrifying.

He went into detail and I went out to the parking lot to throw up.  I cried all the way home, knowing that I was raised on lies (that my parents believed, too) and that the reality was sickening.

Then and there I decided that I needed to go and see for myself.  Before I left (April 2008) I read "Walled" and "The Ethnic Cleansing of Palestine", and "Witness in Palestine" by Anna Balzer plus many other books that exposed the reality.

I stayed in Jerusalem but went to the West Bank a number of times, with a Palestinian guide.  We covered many miles and visited many people in towns and villages and cities.  We spent time in Bethlehem and Hebron. We saw areas where the wall closed off a single house from its neighbors, walls that separated parts of a single neighborhood,  barbed wire fences that cut farmers off from their own fields, and razor wire and sniper guard towers. I met a nun from a convent where the wall cut the convent off from the school and who needed to go through a checkpoint so she could teach. I could look up and see that we were in the sights of Israeli guns and was told that my camera would be confiscated if I took pictures of certain areas.  We went past illegal settlements with green grass, swimming pools, fountains, and parks and saw on the other side of the road the small stone homes of Palestinians with cisterns on their roofs to collect rain water.  Bethlehem was so overcrowded that people had a hard time just getting groceries into their homes. And of course, there were Jews only roads. It was also clear that the Wall was mostly in the West Bank and not along a "border". 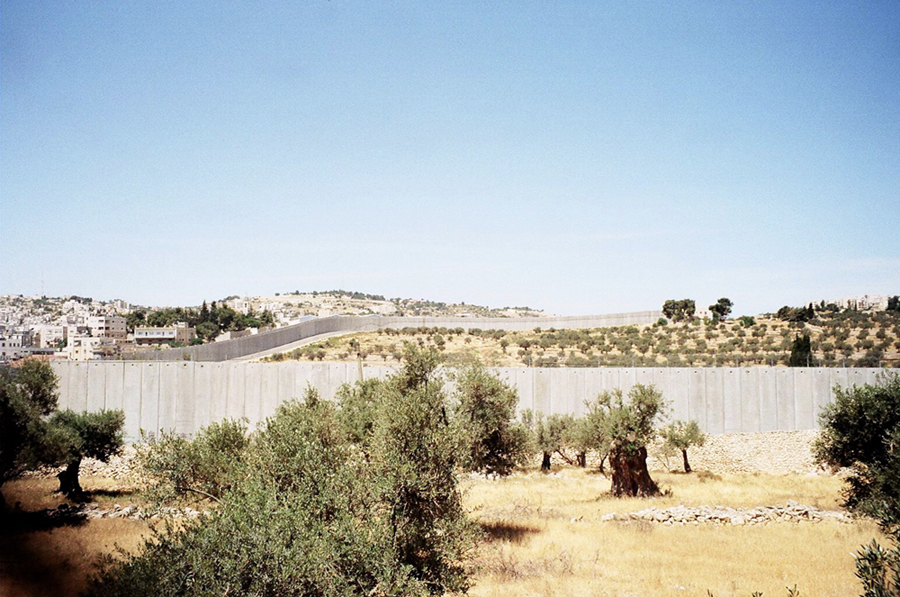 In Hebron, on our way to the Ibrahimi Mosque, I was stopped by 5 soldiers who wanted to know my religion.  My guide was in the men's room nearby so I was alone.  I refused to tell them my religion.  They raised their guns at me and again demanded to know my religion.  I said "what difference should it make?  Are you planning to shoot an American grandmother because I won't answer you?"  Just them my guide came running and said  " She's Jewish, she's Jewish" and they put down the guns.  I saw school children putting flowers on the tomb of Baruch Goldstein, who had murdered 29 Muslims and wounded 125 others at prayer in 1994, which led to curfews against the Palestinians to this day.  Settlers venerated him as a martyr after his death, however as this was an embarrassment to the Israeli government his tomb was destroyed in the late 90's. They went over it with a bulldozer and poured cement over it yet they still put flowers on the spot.  It sickened me.  My guide said we must leave Hebron before the ultra orthodox settlers came through the main market street of Hebron on their way to pray on Friday evening.  He said it could be violent and he wanted me to go.  But I insisted on staying.  I insisted that he leave me there and that I would find public transportation to get back to Bethlehem and then to Jerusalem.

Most of the shops on that street were out of business.  Settlers lived above the narrow streets and threw garbage down on the Palestinians.  The Palestinians had put netting up to catch the garbage, so a settler woman threw a big pail of bleach down and I was lucky to react to the smell of Clorox Bleach and jump out of the way and grabbed a little child, maybe 3 or 4 years old or we both would have been drenched in bleach. 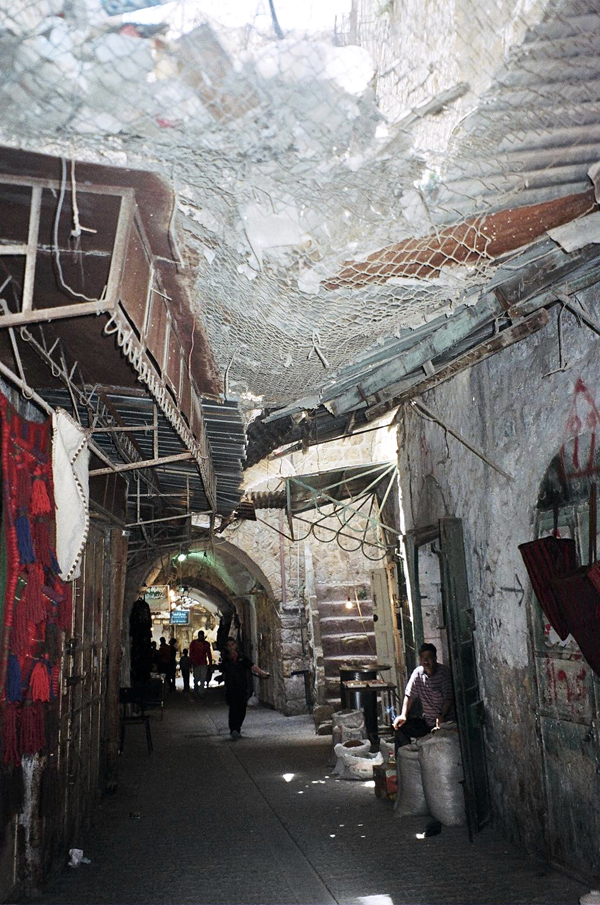 It was shocking.  I hated her.  Later, a group of men and boys, ultra-orthodox, came through the market tipping over displays of fruits and vegetables, crushing and destroying whatever they could on their way to Friday prayers.   When I look back, I think it was Shuhada street.

I found a bus to Bethlehem and then a bus from Bethlehem to Jerusalem.  I sat in the very back of the bus with 5 young women.  4 were Muslim and one was Christian.  We talked on the way back and when we came to a checkpoint we were all made to get out of the bus by armed soldiers or border police.  They looked at passports and saw I was American and told me to get back into the bus.  I said I would wait with my friends, the girls.  He was very insistent that  I leave them to get back in the bus but I refused.  He and another armed man then asked the girls many questions, checking their papers many times, being rude and demeaning.  Eventually we were allowed to get back into the bus.  I was horrified at what they had to endure, but they hugged me and thanked me for staying with them. They said it was usually much worse.  Each of them had been taken behind barriers at some point and made to take off their clothes by male soldiers.  Because I was there, it didn't happen.  They explained that they lived in East Jerusalem and went to the University in Bethlehem, and these soldiers knew them and put them through this every day.  Sometimes they didn't get through and missed their classes.  They expected that it would take them 5 years to complete college because of all the missed time.  I stay in touch with one of them, Riham Abu Gharbieh, and she did eventually graduate but another of the friends dropped out because of the misery of the checkpoints. 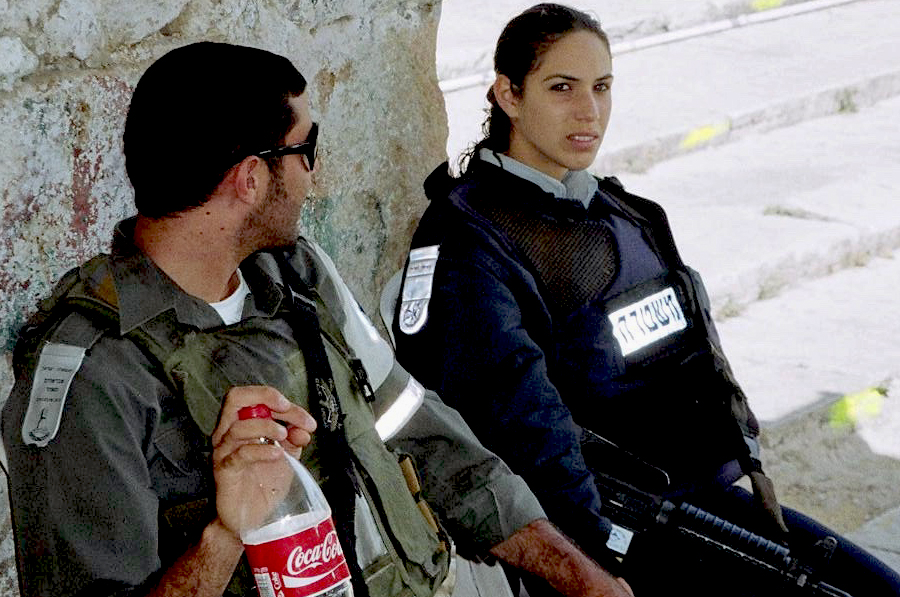 I need to say here that I don't consider myself brave in any way.  I was probably foolish to defy the army, but I'm stubborn and nothing brings out my anger and determination more than seeing injustice done.  I have always been that way.  My mother was that way.  She would stand up for the person who was being taken advantage of, so it was just natural for me.

As soon as I returned to the U.S. I  became active in pro-Palestine organizations and was asked to organize a march that fall and again the next year.  We were harassed by Zionist groups but we had police protection and I had gotten all of the required city clearances.  The sponsor was AAPER, American Association for Palestinian Equal Rights.  I don't know if they exist anymore, but I've not heard from them again, and I still have the banner they sent me to use during the march.

I went to many synagogues where Michael Oren (Former Israeli Ambassador and a snake, a viper) was speaking hasbara and at one of them they passed the mic around so people could ask questions.  When I had it I asked why what he was saying was the opposite of what I saw with my own eyes when I was in the West Bank.  Before I could say  "and don't call me either an anti-Semite or a self hating Jew"   the mike was grabbed from my hands and he proceeded to say that I was either an anti-Semite or a self-loathing Jew.  I yelled "Is that they best you can do?" and was quickly escorted out.  Similar things happened with other speakers at other synagogues.  I blended in with the crowd, took a seat and waited until I could cause some trouble.  We also designed flyers with facts about the Occupation and put them on the windshields of cars that were parked for these talks.  I also put on flyers with my personal experience.

So, yes, I've been called those things and I'm proud of it.  Former friends have dropped me.

In terms of discord in my family, my brother (an atheist who never even wanted to visit Israel) sent me a letter disowning me, stating that he would never see me or communicate with me again because I was a traitor to "my people" and gave "aid and comfort" to the enemy.  That was September 5, 2014.  So I have lost my family.  His wife did call me once and gave me an offer:  if I stated publicly, at my great-niece's Bat Mitzvah, that everything I claimed to see was a lie and pledge complete loyalty to the state of Israel, he would take me back.  I didn't even have to think.  I said no, never.

The result of this was that I had a nervous breakdown and wasn't able to work anymore.  I was forced to retire.  I still have severe depression that comes and goes.  It always sets in around August when I begin obsessing about not having a family for Thanksgiving and gets worse and worse until after new year.  But with medication, my PTSD is under control.

I wouldn't do anything differently even knowing how things turned out.  It isn't brave, it is simply the right thing to do.  Silence is complicity.  You can't "unknow" the truth once you know it.  I believe my mother would have been proud of me.  I have no doubt that if she knew the truth she would have done the same thing.  I will always be loyal to the Palestinian people and I will always defend good people and not fall victim to the Islamaphobia that our government is sponsoring.  I tell others about my experience and my knowledge.  I buy books for them to read.  I don't know if any of them actually read them. My brother and his wife refused to read a single one.