Palestine On A Plate

Interview with the best selling Palestinian chef Joudie Kalla. Joudie has been working as a chef in London for more than 20 years. She is of Palestinian descent and focuses her cooking around this particular Middle Eastern cuisine. She trained at the prestigious Leith's School of Food and Wine and has worked at restaurants such as Pengelley's (a Gordon Ramsey restaurant), under Ian Pengelley, Daphne's and Papillon with tallented chef David Duverger. In October 2015 she ran her first London supperclub, Palestine on a Plate, for the Jamie Oliver Food Foundation, gaining over 70,000 Instagram followers in the process.

1) Why do you think it's important for Palestinians of the Diaspora to preserve Palestinian recipes and cuisine?

I don't only think it is important but very necessary for us to preserve and make a point that our food is our history and our identity. This fundamental part of our life is not only nourishing for us as food, but it is a deeper rooted memory that keeps us connected to a land that our ancestors were from. Food is really a way to pay homage to them and respect them and show them that even though they may have now passed on, we will keep going and pass this onto our next generations to come.

2) Have you always enjoyed cooking Palestinian food and who first inspired you to do so?

I have always enjoyed cooking. Always. It is something that I used to do not only for food but for therapy, taking a time out and really losing myself in the kitchen. I think the idea of seeing my mother and all her sisters and my father's sisters always in our house coming over, cooking and talking and laughing was really something that made me want it more. It was always such a positive thing. It was never seen as a chore. But always about love and family. So it was definitely my mother who got me in there first. And I thank her for it all the time.

3) I read that unpleasant remarks were written on your Instagram account. Could you tell us about this in a little more detail?

Gosh, they are awful so we will spare people the details but they come in all shapes and forms. People are very confident behind keyboards and feel that they can say and do as they want, but the reality is, they cant for too long. Initially, I used to ignore it but now I don't. I retaliate correctly, by reporting them to the correct people and getting them blocked online. They shouldn't have that freedom to crush people because they feel like it. If you don't like something, move on and don't look. I can never understand the psychology behind it. But my main thing is to tell people, don't take it to heart, the misery lies with that person and its nothing to do with you.

4) On a standard Map 'Palestine' is nowhere to be found but it's in the title of your cookbook. How do you feel about that?

How do I feel about the fact that Palestine is not on a standard map?

It's distressing and infuriating as it is deleting a whole nation of people. There are over 7.8 million Palestinians living in the diaspora and we belong somewhere, we belong in Palestine. Not forgetting all the people who are all still living there under oppression and occupation too. Having my book with the title of Palestine is something that I am very passionate about and felt very strongly about. It is nothing more than stating a fact of where we come from and where we belong. Palestine may not be within reach for many but it is in our blood and runs so much deeper than labels.

5) What is the national dish of Palestinian?

For me, the national dish of Palestine is Mussakhan. It is iconic and literally, one of the best dishes out there made to celebrate the olive harvest and our land. Simply perfect.

Apart from Mussakhan, I would have to say Fattet Makdous or Warak inab. I just adore the flavour combinations and the care that goes into each dish. They are made of so many components that compliment each other so well. Its all from the amazing land that we come from that these dishes are made and it shows. 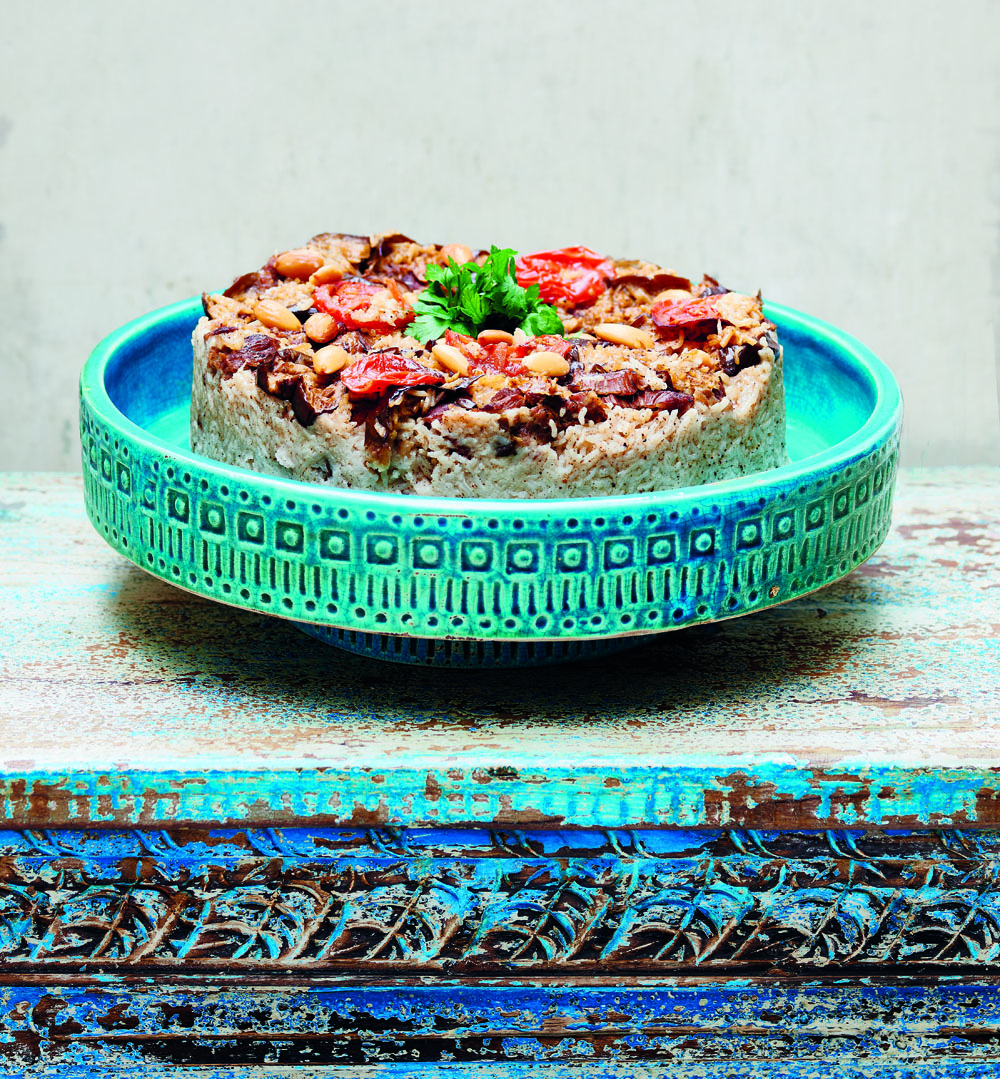 Makloubeh is a traditional Palestinian dish that consists of meat, rice and fried vegetables placed in a pot, which is then flipped upside down when served – hence the name makloubeh, which translates literally as ‘upside down’. We often make this dish for important events, such as Eid, Ramadan and family birthdays as it is a labour of love. The cinnamon in the rice really makes this dish stand out. It’s absolutely worth the effort involved and a real showstopper. My whole family love this dish – we make it in many different ways, but this version is the one I like the most. I personally like adding potatoes to it but I have stuck to the way my mother makes it here. My niece Thalia absolutely adores it – she only eats it when my mother cooks it as she says it makes her tummy happy.

Put the lamb and onions in a saucepan, cover with water without stirring and then bring to the boil. Reduce the heat and simmer for 1 hour, covered with a lid. Remove any scum that appears on the surface and keep doing this until no more scum appears. Once the meat is cooked, remove it from the water but keep the water in the pan.

3 minutes on each side, then drain on kitchen paper and season with salt.

Tip the rice into a bowl, adding the cinnamon, pepper, salt and olive oil and mix well.

Arrange the tomatoes in the base of a deep pan. Scatter a handful of rice over the tomatoes and layer half the lamb on top, followed by half the aubergine, then top with rice. Repeat these layers, finishing with a layer of rice.

Cover with the reserved lamb cooking water to about 3cm (1¼ inch) over the top (add a little more water if you don't have enough) and cover with a lid. Simmer over a medium-low heat for 30–40 minutes without stirring at all – once cooked, you want to be able to tip the dish out in one piece, like a cake.

Leave to cool slightly, then place an upturned plate larger than the mouth of your pan on top and carefully turn everything over to flip the makloubeh onto the plate. Sprinkle with the parsley and toasted nuts and serve with yogurt. 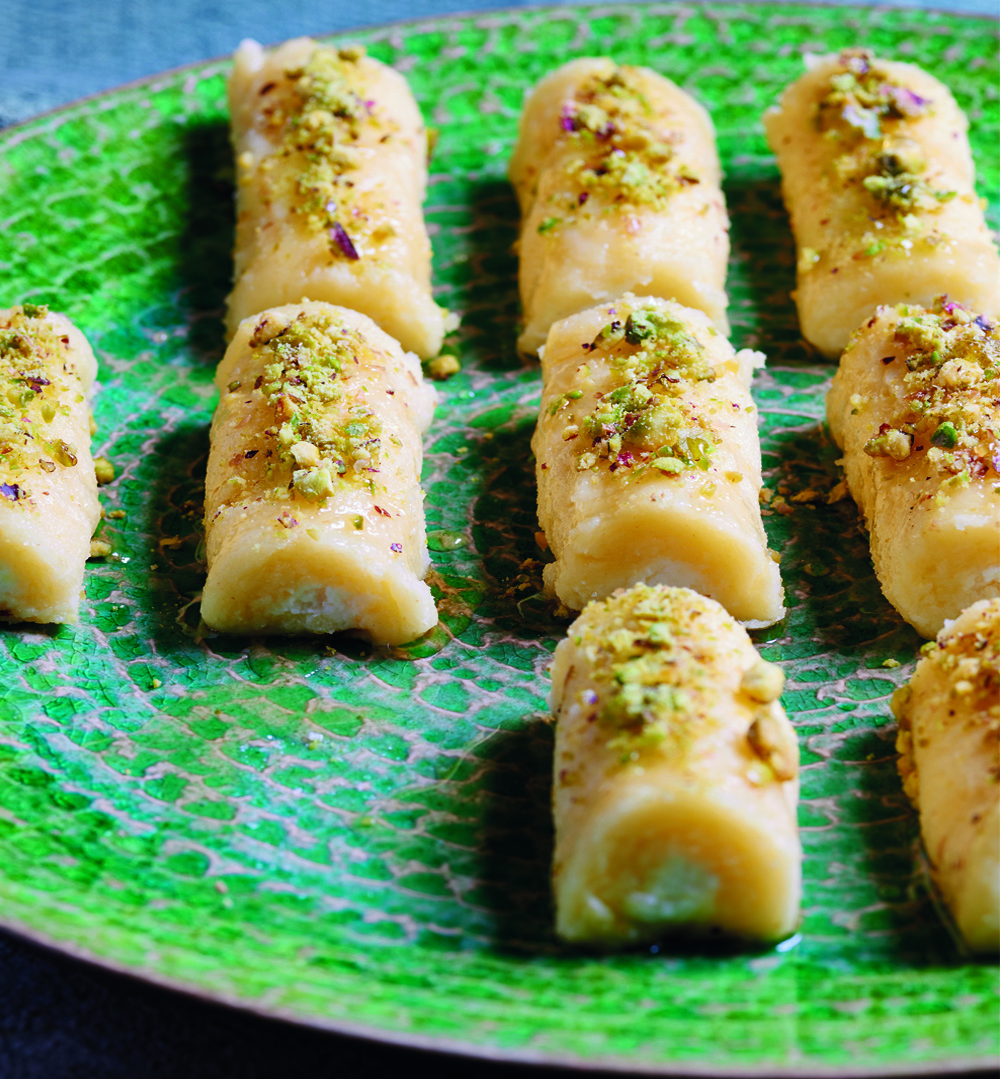 Halawet il Jibn is one of those dishes that we enjoy mainly at celebrations and I often wonder why we don't have it more often as it is so incredibly delicious, yet easy to make. It is a combination of sticky, chewy, melted mozzarella combined with a sugar syrup to make a dough that encases a creamy interior topped with crushed pistachios. These are traditionally made with the delicious, and very famous, akkawi cheese in Palestine and the Middle East, but it is hard to find here, so I often substitute with mozzarella as I have done here. Akkawi cheese is very salty so if you do find it, make sure you cut it and soak it in a bowl of water for about an hour, then drain and soak for another hour before using (or soak overnight). Squeeze it well to remove any excess water. These wraps are also sometimes stuffed with ishta, which is a Middle Eastern clotted cream, but you can use mascarpone or ricotta cheese as I have done here.

Bring the water and sugar to the boil in a saucepan, then continue boiling for about 5 minutes until it has reduced slightly. Stir in the rose water and orange blossom. Add the semolina and mix continuously. Once it has mixed well, add the mozzarella and keep stirring – don't stop or it will catch on the base of the pan – until the mixture resembles choux pastry and starts pulling away from the edges of the pan. Set aside.

Line 2 thin baking trays with cling film and then drizzle them all over with a very small amount of vegetable oil – just enough to stop the cheese from sticking to the tray.

Tip the dough out onto the trays, scraping the sides to get every last bit. Try and flatten and stretch the dough out so that it reaches all the corners, then leave it to set for about 15 minutes.

Spoon the ricotta into a piping bag and set aside. Take your set cheesy dough and make 2 lengthways cuts and then another 3 widthways cuts to make 12 equal-sized squares in each tray.

Snip a small hole in the end of the piping bag and pipe a little line of ricotta cheese into the middle of each square, then fold the edges into the middle to make a sausage shape. Flip them over so the folded side is facing down, sprinkle with crushed pistachios and serve.

Tip: Usually there would be more syrup drizzled on top, but personally I think the syrup that has been used in the cooking process is enough. If you do want more though, simply follow the first step of boiling sugar and water again and cook until it has reduced by more than half to create a sticky syrup and then drizzle this over the top before sprinkling with pistachios.