"The queue for Hamde Abu Rahma’s photographic exhibition and book signing  is already winding around the old factory at Valentine Place in Waterloo, the pictures are not yet hung, but Hamde is outside having a fag and taking selfies with the people he loves on this intensely hot summer night.
‘Hamde, I met you two years ago in Ramallah, do you remember me?‘ I shout.
‘Yes, I know you, how are you?‘ and we hug.
Hamde‘s face belies his young years, he has that handsome Belmondo etched-in look of someone who has lived and seen too much but it isn’t surprising. Each week he has documented and photographed the non-violent demonstration in Bilin, his beloved part of Palestine in the West Bank, and each week he sees violence on the part of the Israeli soldiers and  is drenched in toxic tear gas which has damaged and killed so many, men, women and children. 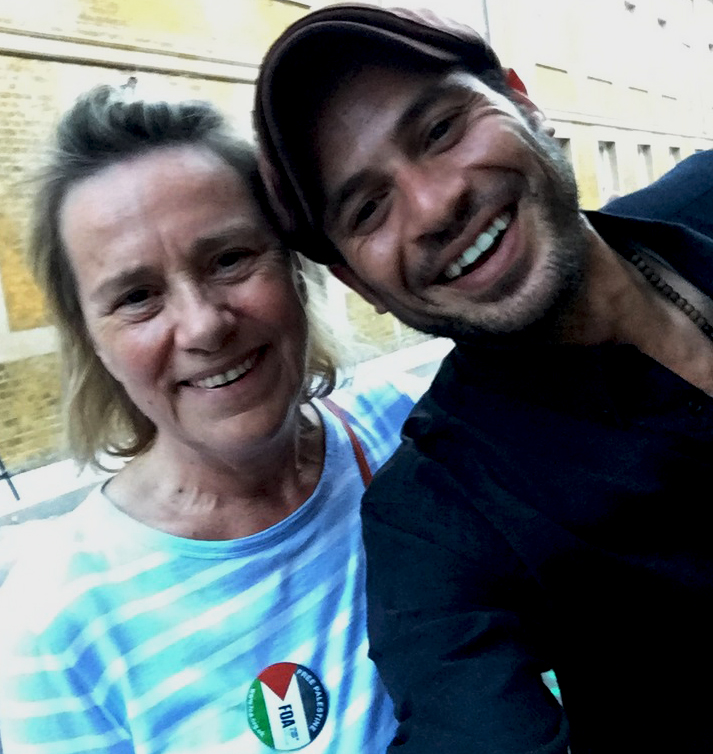 What I suspect maintains that generous impish grin is his fight for and longing for freedom from the occupation, which has taken away, among others, his beloved cousin, Bassem, the god fearing gentle giant of a man, El Pheel,  shot for no reason. Each  week like a pied piper Bassem took the children in his wake at the weekly demonstration, flying his flags and balloons in his  childlike loving way, and each week they aimed their teargas guns at him, until one day, they aimed at his head and chest, a double kill. It still bothers Hamde that 6 years on, there is no  justice.

In London this week, he is in his element, taking on the world with enormous energy and love, deep love, for all those that help him in his cause. For one month now he has been travelling throughout the UK showing the truth, as he puts it, ‘we have to tell the truth, only the truth‘. His pictures attest to his life,  a pink flower in the casing of a black tear gas canister, a child smiling through its barred splayed fingers, youngsters in colourful clothes climbing a huge tree, ‘I like to show how we live. We want normal lives like you all want normal lives, and we try to live it under occupation.’

He has time for everybody, despite missing those that he really cares for and his longing for Palestine where he will be going home the next day brings his face out in wreaths of smiles and laughter, but then he looks serious, he is keen to find out why they invaded his family compound, a few days after he left the country. ’They came at 3 in the morning terrifying  my brother and separating him from his children. Why are you doing this, asks my  brother? No reason. No reason, they say’. He shakes his head.

The exhibition, organised by Friends of Al Aqsa and ‘I acknowledge apartheid exists’ is opened by Mahmoud Zwahre, a Palestinian born activist studying in the UK who gives an impassioned speech, ‘Whatever is happening in the Middle East, the Palestinians are paying the price… Do you realise the youngest olive tree still growing is older than Israel itself… They have not succeeded to move 5 million jews to Palestine, they succeeded in removing 5 million Palestinians. Please. We want to dance in the light, not in the darkness.’ 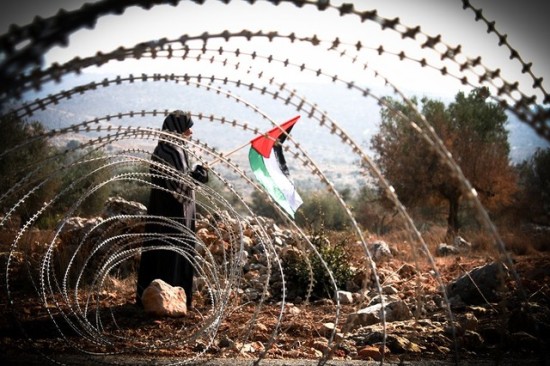 Hamde, award winning photojournalist and activist seems tireless, his mood expansive despite being a month on the road in the UK. The visa that brought him here is for 6 months and took 2 years to get, he promises to be back, it took him 20 years of his life to finally see the sea. ‘I have tears in my eyes because I have not met such beautiful people but it is also too much to be away from my home. I will try to come back as soon as I can. But please. Social media is very important for us, I have met many of you on social media and some in Palestine, keep coming to Palestine, we will show you life as we live it, we will welcome you but please, do not be silent, silence will kill us all.’  The long low room echoes to stamping and whistling and deafening claps."

More of Hamdes work can be seen in the slideshow here supporting the charity JMOV Global and their charity to help cancer patients in Gaza. and on his own website here www.hamdeaburahma.com