Mohammed Othman [Executive Director] is a Palestinian non-violent activist, community organizer and film producer with over a decade of experience working for and founding various NGOs across Palestine and traveling around the world speaking on behalf of Palestinian human rights. As youth coordinator with the Stop the Wall campaign, Mohammed worked with students all over Palestine leading community building and leadership programs. As a tour guide, his clients have included former American President Jimmy Carter and former British Prime Minister Tony Blair. Since leaving his work as a community organizer, Mohammed has been working as a producer for Qalqilya and a line producer for other independent filmmakers working in the West Bank. As Executive Director, Mohammed is overseeing all aspects of SkateQilya, and at the same time, is functioning as our programs manager, directing our skate instructor in Qalqilya and working directly with the students. 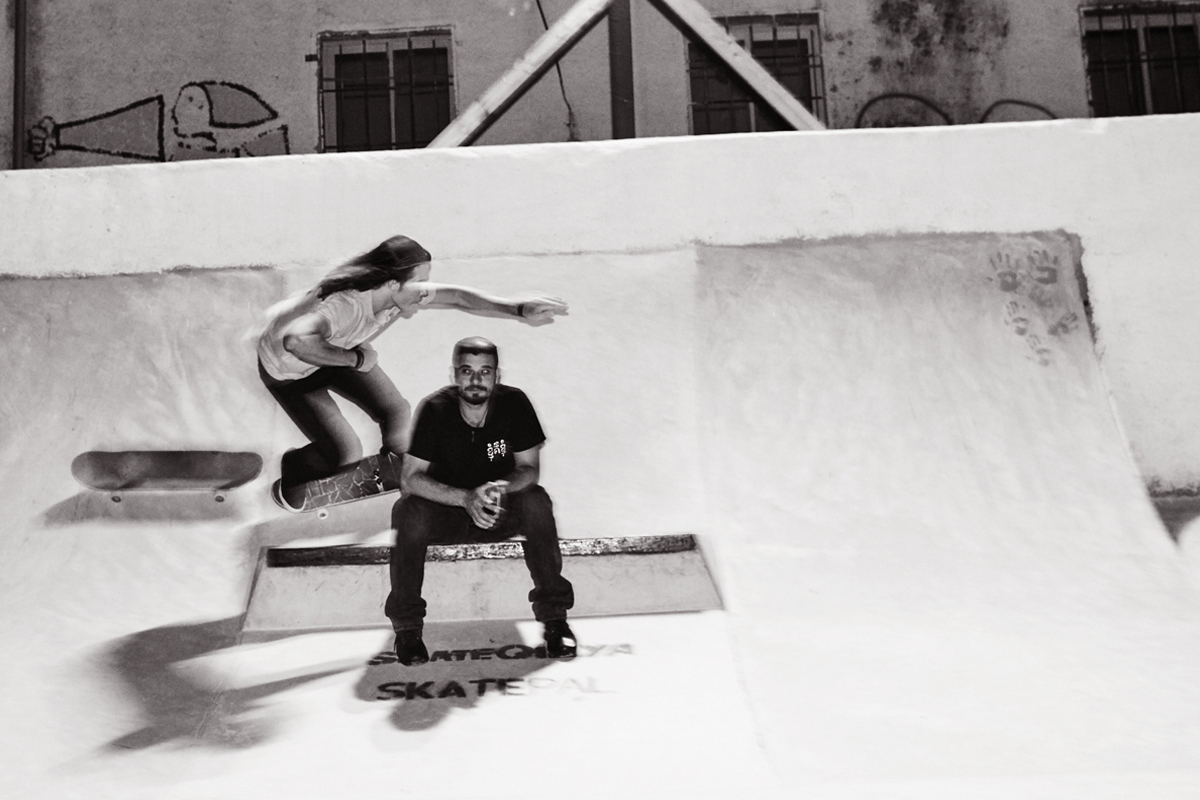 How do the Palestinians feel about the peace plan proposed by President Trump?

The situation in the West Bank and Gaza is very volatile right now. The Palestinians are angry that Trump’s so called ‘deal of the century’ is going to be imposed on us whether we like it or not. He thinks he can do this just because the Saudis and other Gulf states have backed his initiative. What’s even worse the architect of this plan is Trump’s 37-year-old son in-law Jared Kushner who has no background in international diplomacy and politics.

Year after year the number of Israeli settlers in the West Bank has increased (there are around 1 million settlers), Israel continues to confiscate land to house them. Water and other resources in the West Bank are taken away from the Palestinians to be used by the settlers. This land grab is ongoing for example recently, in March, plans were approved to double the settlement of Har Gilo by constructing new homes, public buildings, a gas station, parks and other amenities. Israel is spending more in the West Bank than behind the green line. Imagine each mile of the wall cost Israel $1 million.

The Palestinian people are also anxious about who will represent them in negotiations. Our president Mahmoud Abbas is in poor health. We are concerned that there might not be a legitimate leader to represent us.

A few days ago, I attended a town hall meeting in the West Bank, where there were activists, members of the Palestinian authority and members of various political parties. Everyone was worried and pessimistic. No one has any hope in Trump’s ‘deal of the century’, no one believes that the US can be a fair and impartial peace broker. We gave up on American initiatives long ago.

In 1994 when the Oslo peace treaty was signed I was 19 years old. In those 24 years life for me and my people has only deteriorated.

What made you decide to set up SkateQilya?

Adam Abel one of my partners in establishing SkateQilya, was doing a project on borders and walls all around the world. This brought him to Qalqilya that lies in the shadow of a 20ft wall. Adma was shocked by the wall he’d never seen anything like it. He decided to stay and discover more about the place and the people.

I first met Adam Abel in 2011 in Ramallah at a dinner. He looked at me and asked my name. When I replied. He said “I know you. When you were imprisoned for your activism in the BDS movement by Israel in 2009 my wife and I signed a petition calling for your release. In our opinion that petition played a vital role in bringing about your release from jail. It was empowering for us to know we signed a petition that lead to the release of a prisoner of conscience”.

It was funny because Adam had tried to contact me repeatedly but I had never replied. He told me about a boy, Sajid who was the first Palestinian skateboarder.  Adam wanted me to make a film about Skateboarders in the West Bank. He wanted to tell their story of the difficulties they faced due to the occupation but also because there really wasn’t a place dedicated for this sport.

Initially, I told him I wasn’t interested. I was busy with my work as an activist and a political tour guide for international visitors to the West Bank and I enjoyed it. I also didn’t know anything about film making or using a camera. But somehow he talked me in to it.

We started filming in 2012 with money we had raised from online crowd funding platforms and financial aid from an organisation called ‘Tashkeel’. In 2014 we had finished filming, but we couldn’t abandon these wonderful kids we had grown to love. So, with the help of pro-skate boarder Kenny Reed, Adam Abel and I decided to set up SkateQilya. http://www.skateqilya.org

Our first task was to find a place where we could build a Skatepark. After speaking to the municipality of Qalqilya, SkateQilya was given use of space inside the West Bank’s only zoo. Again, we raised funds through crowd funding platforms. ‘Playgrounds for Palestine’ was our partner from day one and also helped us raise money.

This year, 2018, we will be running our 3rd annual free summer skateboard camp for 50 children. The truth is that it’s more than just a skateboard camp it’s an educational camp.  We work on empowering the children, we teach them leadership skills, photography, gardening. We run workshops on how to use the internet and social media safely. We also teach them English. This year we’ll also be running a work shop about sexual harassment from within the family as well as outside. We have female instructors and the children trust them.

We do come up across some difficulties bring boys and girls together and discussing taboo issues like sexual harassment in a culturally conservative environment like the West Bank but we have managed to overcome them. The girls who come to our camp (more girls attend then boys) feel they are part of one big family. They learn there is no difference between boys and girls and they return to their families with greater self-confidence.

This year we will be using our newly constructed 650 m2 skate park in the village of Jayyous. I am going today at 2:30 pm to make repairs to the ramp. It is the best skate park in the Middle East. We were able to build it with the help of Playgroundsforpalestine.org and Skate Pal UK.  Construction began in mid-September 2017 and we took turns working on it from 7am to 2am. We had to work flat out. It was completed in mid-October.

The opening ceremony was on the 21st of September, the same day as my birthday. People had come from all-around the world to celebrate with us. There were journalists from international news networks like CNN. On that day the Israeli army decided to invade our village. They started shooting tear gas canisters. The children of course automatically started to throw stones when they saw the army and tanks. Our celebration was brought to a halt and I was devastated. Luckily there was no major damage to our skate park and so as soon it was possible for the skaters they started to use the new Skate park.

Our camp not only helps the children attending develop self-confidence and skills but it also provides work experience for high school students. Our lead counsellor in 2018 will be Faiza Batta, 17, from the village of Hajjah, she had worked for us a counsellor in 2016 and 2017 as well as a translator for Kenny and Adam. She has studied advanced English courses with AMIDEAST and is able to write and speak English fluently. There’s also Omar Hattab, 18, who had volunteered with us as a skate instructor, Omar has a part-time job teaching skateboarding in the nearby city of Tulkarem now. This is the first paid skateboarding job for a Palestinian.

I love being a part of SkateQilya. When I was growing up we didn’t have anything similar. I was fortunate enough to eventually have an opportunity to travel, study and attend workshops abroad. SkateQilya gives me an opportunity to give back to the children of my community and share with them what I have learnt.

In 2005 I travelled to South Africa where I met those who had been leaders in the struggle against its apartheid regime. I learnt about their Boycott movement, how it brought down apartheid and how the blacks of South Africa won their freedom.

In 2005 we started working on the frame work of BDS. The initiative was launched in 2006 and I started to encourage members of the global community to join our movement. When I spoke to the Palestinians of the West Bank about BDS they laughed at me. They said to me “We are dependent on Israel and its economy, how are we supposed to boycott it?” I replied that let’s start with the products where there is an alternative.

Since 2006 BDS has grown and we have had one victory after the other. I believe that it will continue to grow until we achieve our goal of Freedom for the Palestinian people.