Bullets whizzed past my ears amid the burning tyres and teargas of a
West Bank demonstration near Jerusalem. I never imagined that after a
lifetime sitting at a desk in various book publishing houses, and now
retired from journalism, I would suddenly get up and find myself in the
Middle East, hanging on for dear life to an ancestral cross. I got used to
afternoon naps and long days in front of the computer in the suburbs of
London. I had become an armchair observer of events throughout the
Middle East, a Facebook devotee and a committed Palestine activist.
A life-altering event, the death of my beloved Swiss partner, brought
about unimaginable changes to what I once considered a certain future of
gentle swimming and weekly demonstrations for Palestine in my home
city, London. In Basel where my lover lived, I had to do all those things
that are left to a grieving relative, giving away clothes and sorting
through letters and papers, seeing things I had not looked at for many
years.

One day back home, I took out of a drawer the ancient clothes and
personal items from my partner’s great great great grandfather, a certain
Bishop Gobat of Jerusalem, which were now mine for safekeeping. With
my new yearning to do something else in life, alone, I became more
interested in the history behind the heavy black cloak, which reached to
my knees, with its red embroidered lapel and delicate white gauze scarf;
the fine jewel encrusted dagger which undoubtedly had protected the
bishop during turbulent years in the mid nineteenth century in the Old
City of Jerusalem; the double inkwell he would have used daily to write
his memoirs of his missionary days in Abyssinia, Malta and the Holy
land.

Samuel Gobat was a Swiss Anglican Bishop born in the Jura in 1799.
His ministry as Bishop of Jerusalem in the Old City lasted for 33 years
and it was his last resting place. I had two portraits in small oval frames
from those years: one of him, a large, bearded, strong looking man, and
one of his plain, stout wife, as well as a beautiful 19th century German
print of Omar’s Mosque in Jerusalem, which had always watched over
me in my home office. The usual internecine arguments among the varied
Protestant sections of Jerusalem’s evangelical life, especially among the
English and German communities over which he ministered, may have
turned the Bishop’s thoughts to another project that would have greater
value than converting Jews to Christianity. Just outside the Old City by
the Jaffa Gate, not far from his own home inside the walled city, he built a
school for orphaned Arabs and for the elite of Palestine who would later
become politicians and doctors. The beautiful school with its famous
Protestant Cemetery was still there and operating as an American
College. Here was the sign for me to get on the road. I would give all
these precious historical items back to the college the Bishop had created.
And finally see my beloved Palestine that I had thought about since a
teenager.

Leaving Jordan’s capital of Amman, I arrived at the Allenby Crossing
into Palestine, to face the lengthy questions of the Israeli border guards. I
was wearing the elaborate, hand-forged silver cross I had found among
my partner’s possessions. I thought of the Bishop.

‘What is the purpose of your visit?’ asked the border guard, while
Googling me online.

Little did I know then what I was to suffer later, that I would be on my
knees praying for my life.

I wanted to experience Jerusalem and the Old City straight away. I was
struck dumb, and in tears, by the view from my hotel rooftop. There was
the golden Dome of the Rock shining out into a navy blue, starlit, warm
night. It was beyond my wildest spiritual dreams to be here. I was back in
history, seeing what the Bishop saw every day from his house, the
beautiful Mount Zion and the hills of Palestine. I arranged a visit to the
college he had founded, outside the Old City, down a dusty road, and
happy to see it intact and as delightful as in the prints and photos I had
seen in the Bishop’s memoirs. His substantial tomb, with a relief of his
head and carvings in marble, was guarded by iron railings and a gnarled,
overhanging olive tree, still pitted with bullets from the days of the
Ottoman Empire. 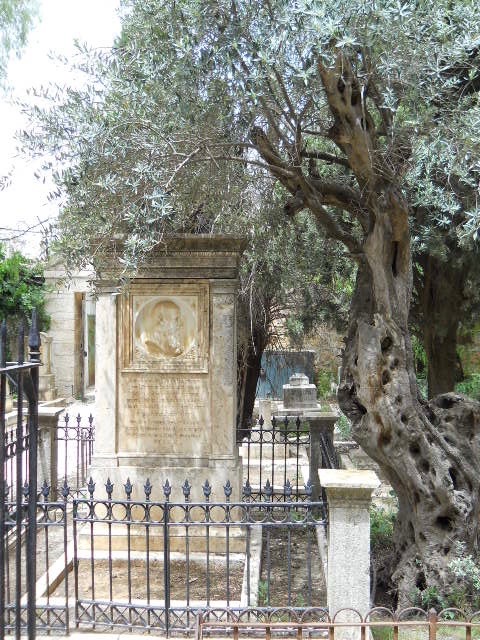 After delivering the clothes to a delighted Principal and enjoying the
complex with its magnificent gardens overlooking Mount Zion, I moved
on and caught a bus heading towards Bethlehem. I arrived at a camp
where a good friend of mine was living. Dheisheh was one of the first
refugee camps to be created in 1948, but nothing had prepared me for the
starkness, the poverty and the sense of impermanence of a place which
had existed for 65 years. My friend, who was originally from Haifa,
showed me the one room where his family of ten were housed as they
fled those who had come to take over his land back in 1948. Here in the
camp there were no gardens, but a mass of purple bougainvillea and
heavily scented white jasmine overhanging small plots of vegetables.
‘Why are there no gardens?’ I asked.

‘We do not want to make this permanent, our home is in Haifa. We will
return.’

I had to reluctantly leave him and find the home of the International
Women’s Peace Service near Nablus, where I had arranged a month-long
stay as an activist. It was in a small dusty village, with overflowing
garbage bins and dozens of feral cats, small whitewashed houses and
exquisite gardens filled with orange and lemon trees, great bushes of fiery
red azaleas and rows upon rows of vegetables. I joined an American lady,
an Irishwoman and a German activist in the large house with its courtyard
shaded by vines and exquisite apricot trees. I was glad to be in this
beautiful country, feeling strong and well.

One Friday, after a delicious lunch of home-made hummus, tomatoes
from the vine and apricots from the garden, with fresh bread as large as a
bicycle wheel, made by Fatima in the house alongside ours, we set off for
Qalandiya, near Jerusalem. The taxi drove through acres and acres of
silver-leaved olive groves, a beautiful sight as the trees were bending with
their autumn fruits ripe for shaking and picking. On arrival at the central
dual carriageway of the town, the smell of Arabic coffee and cooking
falafels forced a stop for yet another taste of Palestine. The smoke curling
up into the sky in the distance made us a little nervous.

‘Oh, that’s normal, it happens every Friday after prayers,’ said one of the
boys serving us, his red keffiyeh tied tightly around his head and trailing
down his back.

We joined the throng of people heading towards the smoke. Flags were
flying, red and black and green. Young men and women joined hands.
Some of the protestors were my age, singing and chanting for their
freedom, and I joined in heartily.

‘Don’t go to the barriers, my dear,’ said the knowledgeable American
lady, ‘just stick with us.’

I had no fear, I was excited, I went to the barrier and started to take
photographs of the surly Israeli soldiers. Suddenly everybody started
running back and I was alone.

‘Come on lady!’ shouted a young Palestinian. Then I was completely
enveloped in tear gas.

I could not breathe and fell to my knees, staring at the dusty ground,
throwing up and unable to see clearly. I felt for my cross.
‘Come on, get out of here, those are real bullets,’ screamed a young
man who dragged me by the arms as shells whizzed past and pinged on
the drainpipes and windows of the buildings. He threw me onto the dusty
ground in an empty shop. 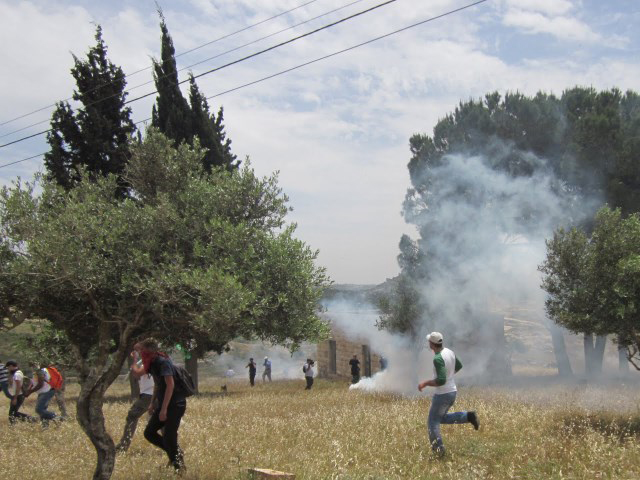 I thought I had learnt my lesson, but I went back again the next week,
this time to a beautiful village called Nabi Saleh where the Tamimi family
have been trying to protect themselves and their village from constant
pillage, theft and murderous assaults by the IOF. I was trapped in the
corner of a field and stunned by tear gas aimed at our heads, and fell to
the ground. Feeling very ill, I decided that I couldn’t go on
demonstrations any longer. We stayed around at the peace house every
day to help protect the surrounding villages from the nightly raids by the
IOF. I realised that I must follow my conscience and with the
magnificent ladies from the peace house we had to do what we came to
do. We worked together and forged fabulous friendships.

It was with some relief that I booked into my hotel in Jericho for the
final leg of the journey home. I was anxious to make my plane the next
morning and be back in the safety of England, and to see my family
again. I had to be at my eldest son’s wedding in three days’ time.
The hotel was in a camp, and as I realised that the falafel sandwich I had
eaten earlier in the day had been home to several flies, I summoned every
ounce of strength to get to the bathroom and back. I finally fell asleep in
the empty hotel, to be woken by the metallic ping of bullets ricocheting
off the metal shop front downstairs where I had earlier taken my mint tea.
It was three in the morning. I wanted to go out and take photographs.
Luckily, I could not get up as my stomach burned and churned. The next
morning as I left, I noticed that the bullet holes were close to the front
door I would have exited had I been fit and well in the night. I longed for
England.

I made my son’s wedding, though I was sick and shattered. My children,
now fathers themselves and keen to have at least one grandma still alive
to play a part in their children’s lives, suggested I shouldn’t go back to the
West Bank.

But I was hooked, and I returned and helped in the peace house again
and to this day I have absolutely no regrets. In fact, I am planning my
next trip right now. Sorry, boys. Last time I travelled to Palestine, I saw
the special glass case which now housed all the things which had drawn
me to Jerusalem in the first place. The Principal of the American
University College had built the splendid vitrine, and even copied the
emblem of the Bishop’s hat from his tomb, while resting from a heart
operation. 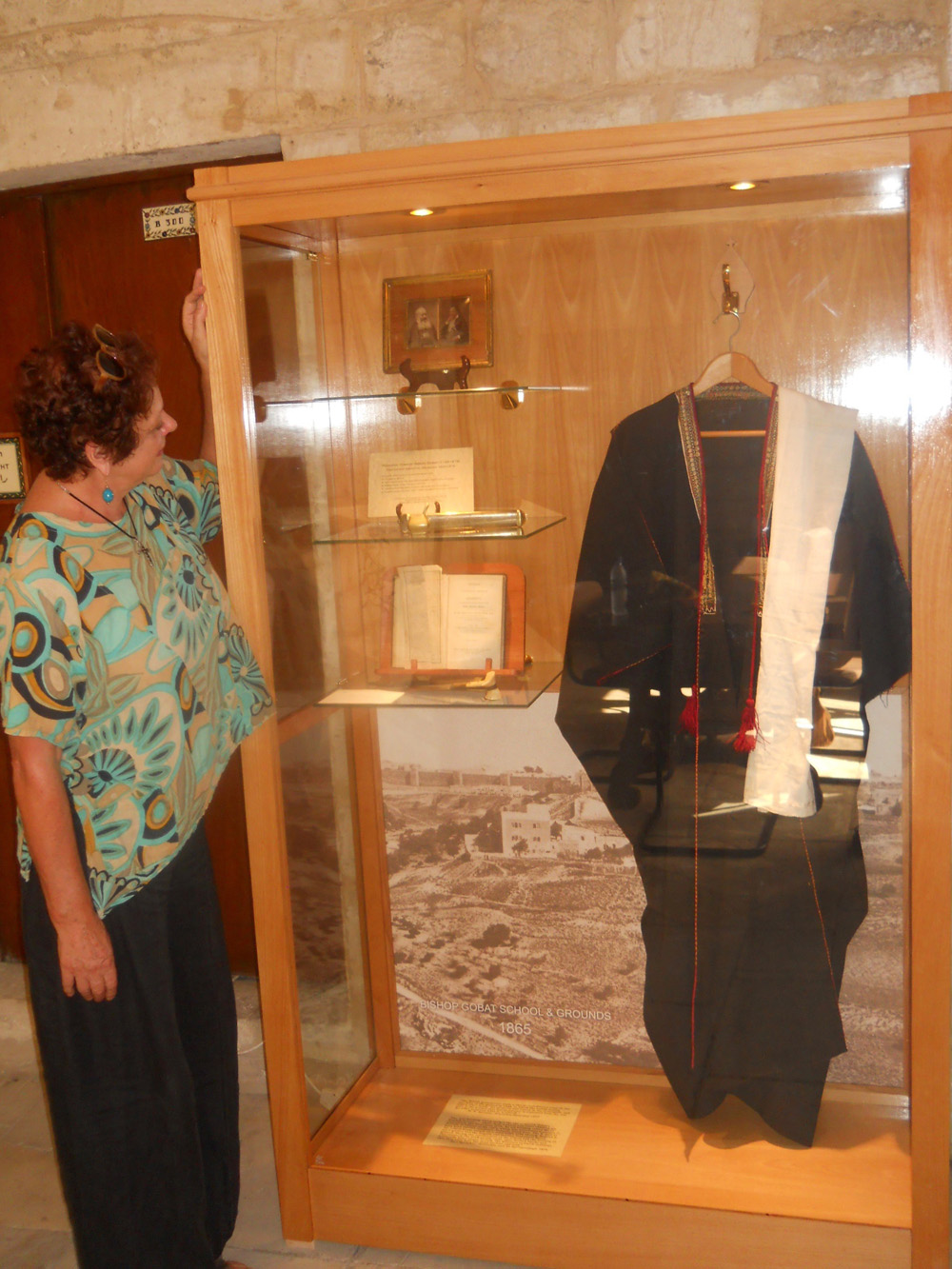 ‘Your precious things helped me recover,’ he said.

I felt at least what I had done was the right thing to do. My joy at my
lover’s inheritance finding its final resting place was however over in a
flash. A few feet from the large wooden exit door of the Bishop’s college,
like a stab through my heart, I saw a large poster, for Zion, and for a
Greater Israel, at the centre of which was the Dome of the Rock.
‘Oh, no! Is this a Zionist college?’

‘Of course not,’ said the Principal, ‘the students put up scenes that they
like, it isn’t a Zionist college at all.’

And of course, it was. A Christian Zionist College. I am still trying to get
my beloved’s clothes and other precious items back because I know the
Bishop would be turning in his magnificent tomb if he knew just who his
cloak ended up with.