Broken Vows The Tragedy Of Power

In May 1997 the people of Britain raised their hopes high with the election of the youngest PM since 1812… with an approval rating of 93% and a landslide victory to kick start his tenure, Tony Blair was the longest serving Labour Prime Minister in office ever.

Blair arrived on the scene full of promise his manifesto read like the proverbial new broom, He would sweep clean the sleaze, his New Labour would modernize Britain putting an end to the age old boys clubs and special interest groups rife in Westminster. Tony Blair was the new white knight, nothing was ever going to be the same…...

The cracks began to show, the spin was spinning out of control. Tony Blair began to lie his way into more trouble for himself and the people of Britain than he was able to gracefully lie his way out of. His claims for rebuilding Britain’s troubled infrastructure, the Schools, Hospitals and welfare services rang hollow, dodgy deals and cagey behaviour left us all with more questions than answers. The biggest quandary of all, how someone who now works for the worst despots of the world, earning millions of pounds fulfilling his duties in the service of dictators was so quick to serve up Saddam Hussein on a platter to his American friends he risked his now tarnished name to do so.

……How far from his flamboyant arrival, his low key and almost unobtrusive exit.

The Author of Broken Vows Tom Bower was there in 97 in at the beginning, he is here now for the end. Unanswered questions are put to rest and secrets and lies are blown open with this careful and detailed exposé on the tenure of Tony Blair. Tom Bower has drawn on his remarkable access to nearly 200 Politicians, Whitehall officials and military officers who shine a light on the truth behind Blair’s time in office. To do so he has kept pace with Blair on his travels and adventures around the world, from Asia to the Americas and all over the Middle East, exposing the underbelly of his multi-million pound business being a political advisor for sale to the tyrant with the biggest purse.

Tom Bower's book Broken Vows is an explosive thriller exposing the political intrigue and machinations of a strangely enigmatic statesman who stands forever as an example of the disastrous and devastating tragedy of power.

Buy you copy of Broken Vows - Tony Blair The Tragedy Of Power from Amazon.co.uk 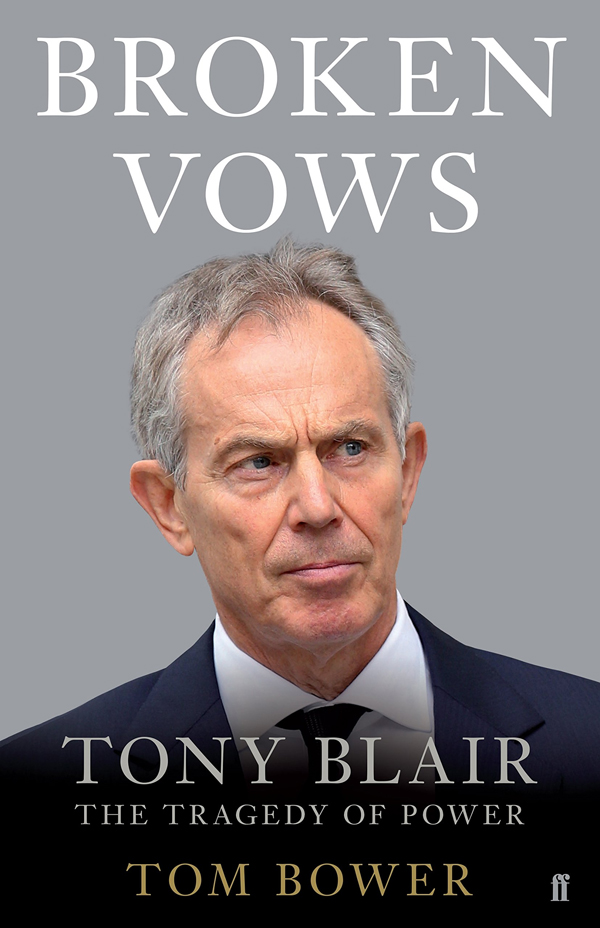